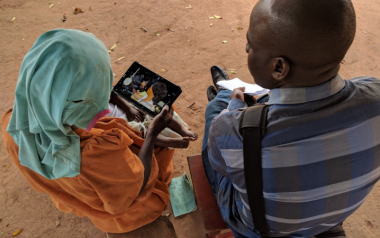 People often end up making suboptimal choices because they lack critical pieces of information, fail to notice important features of the data they possess, or believe things that are not true. Indeed, these "informational inefficiencies" are considered an important reason why farmers in developing countries miss out on the benefits of modern technology and improved agricultural practices. In Uganda, previous research as part of the Policy Action for Sustainable Intensification of Cropping Systems (PASIC) research project suggests that a lack of information about the existence, use, and profitability of modern technologies and recommended practices constrains technical change among rice farmers. Research also shows that a simple piece of information can have a big impact on technical change. Small design attributes, such as the way in which the information is packaged or who delivers it, can dramatically improve the effectiveness of an information campaign.

​An ongoing IFPRI study under the Developing Local Extension Capacity (DLEC) project—a collaboration with Digital Green funded by the U.S. Agency for International Development under the Feed the Future Initiative—looks at gender in the context of information provision by agricultural extension services. Given that extension services in many countries tend to employ male extension workers and target male household heads, little is known about what can be achieved by changing the gender of the information provider(s) and its targeted recipient(s).

This study tests if household-level outcomes—awareness, understanding, experimentation, or adoption of a technology or practice—can be influenced by small changes in the extension approach through the following pathways:

The study involves almost 4,000 maize farmers in Uganda in five eastern districts. The information intervention is implemented as a short video shown to farm households according to the experimental design: Videos in which the extension information messages were presented and narrated by either a man, a woman, or a couple were shown to either the man, woman, or a couple.

The video features recommended practices on maize farming, such as inorganic fertilizer use and timely weeding and proper spacing. It also promotes a more commercial approach to farming more generally, such as starting small and re-investing part of the profits.

The videos were shown to study participants in August and September, right before the start of the growing season. Farmers will be visited again at the end of the season in February 2018 to collect information on outcomes. Data from surveys conducted during these visits will be used to evaluate the effectiveness of the video interventions.

It is too early to say anything substantive about these outcomes, so stay tuned. But an initial look at data collected during the first video screenings immediately reveals the devastating impact of the fall armywormin Uganda. While a farmer might normally harvest between 600 and 800 kg of maize per acre, the armyworm infestation in the first season of 2017 has reduced yields to only about 280 kg of maize per acre.

A look at data collected immediately after the video screening also reveals some interesting insights. To check if people actually learned something by watching the video, participants completed a short test (just three multiple choice questions) related to the content. Our analysis shows that the information treatment seemed to work: Households shown a video are significantly more likely to answer the multiple-choice questions correctly. In addition, households in which the video was shown to a couple are also more likely to answer the questions correctly when compared to households in which a single individual (either the man or the woman in the household) viewed it.

This Post was originally published on the DLEC Extension & Advisory Services Community of Practice website and wirtten by ​Bjorn Van Campenhout, Research Fellow in IFPRI's Development Strategy and Governance Division​.​​
A Country on the Cusp of a Digital Revolution in A...
Innovation vs. strength: What is the future of ICT...