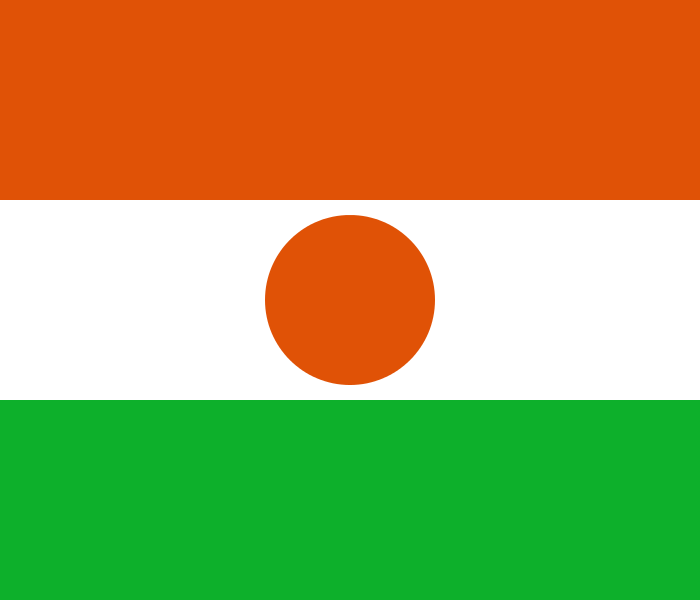 Niger is geographically the largest country in West Africa. Over 80 percent of the land of this landlocked nation is covered by the Sahara desert. The population of Niger is about 17 million, and its capital is Niamey. The country is prone to frequent droughts, desert encroachment, occasional famine threats, HIV/AIDS, and at times to political instability, and was rated in 2009 as the poorest country in the world in terms of human development. Its foreign earnings depend mainly on the export of uranium ore.  Niger is administratively divided into 27 regions, which are subdivided into 36 departments. The departments are further divided into communes that are divided into quarters, villages and settlements.

The climate of Niger is subtropical, very hot and dry. The terrain comprises desert plains, sand dunes, savanna, and hills. The rainfall is erratic and scant. The agriculture, forestry, and livestock sectors are the primary sources of Niger’s economy, occupying more than 80 percent of the labor force. From 2007 to 2009, the combined contribution of these sectors to the GDP was about 42.8 percent. Farming is subsistence and the agricultural sector suffers from problems, such as severe water limitation, desertification, weak institutions, declining soil fertility and poor marketing structure. Agriculture was badly hurt in 2004 by a serious locust outbreak and drought leading to international appeals for urgent food assistance to avert a famine. The major rainfed food crop is pearl millet; other crops include sorghum, wheat, cowpeas, onion, garlic, peppers, potatoes and cassava. Rice is cultivated in some irrigated area and a few vegetable crops are grown for export purposes. Livestock rearing includes cattle, goats, sheep, poultry, camels, donkeys, and horses.

History of Extension and the Enabling Environment

There is no mention of extension type activity for the farmers during the period when Niger was a French colony. In fact, the colonial forces apparently destroyed the traditional balance of natural resources in their quest for the timber needed for constructing houses, resulting in an environmental disaster that continues till this day.  After Niger’s independence in 1960, the most significant financial and technical assistance to agricultural extension in Niger was seen in 1980s when a World Bank-financed project introduced the Training & Visit (T&V) system of extension. There is no evidence that the implementation of this particular model sustained after the project ended in 1998. The extension services gradually declined, leaving less and less technical support for farmers.

The Nigerien Government adopted a Poverty Reduction Strategy in 2002, a Rural Development Strategy in 2003 (Strategie de Developpement Rural), and then a Medium Term Action Plan 2006-2015, all aiming at the improvement of food security and sustainable management of natural resources. The Rural Development Strategy identified eight priorities for translation into action, and one of them was a study for developing and implementing an integrated advisory system for rural development. In 2007, the government requested the Food and Agriculture Organization of the United Nations (FAO) for technical assistance and set up a National Steering Committee for working with FAO. Meanwhile, the government also prepared the 2012-2015 Economic and Social Development Plan (PDES) to address major challenges, with the food security being at the top.

FAO, in collaboration with the National Steering Committee, assisted Niger in developing a broad-based participatory consultation process involving the representatives of the government, private sector, NGOs and farmers’ organizations. A team of national consultants also helped. Although an option of the farmers paying to NGOs for extension advice was also discussed, but it was not favored by resource-poor farmers, apart from being something against their culture. There was consensus among all the stakeholders for having a pluralistic, demand led extension advisory system with active participation of farmers’ organizations, but also underlying the need for capacity building of these organizations. Exact role of potential service providers including academic institutions and agricultural research in the pluralistic extension approach was still to be explored. However, before the process could be completed in 2009, the government in Niger changed. Reportedly, an agricultural research and extension program has been chalked out by the new government, but its details are not known.

Another recent extension related development in Niger also comes from FAO. A five-year, € 6 million multi-donor initiative has achieved yield increases of up to 100 percent in over half of Niger’s farmer villages under a program called IARBIC. The donors of the initiative are Belgium, European Union, Luxemburg and Spain. Under the program, support is provided to the agricultural input shops run by farmer organizations, and their access to the financial and advisory services is enhanced. An inventory credit system called as “warrantage” under which farmers, rather than selling their produce at harvest time when prices are low, stock part of the harvest and use it as collateral to obtain credit from a bank. Also, IARBIC has set up a €653,000 fund as guaranteed collateral for loans requested by eligible farmer organizations. It lowers the risk of losses in the event of default, encouraging lenders to make money available.

The Danish International Development Agency (DANIDA) has recently approved a project for Niger, “Employment Generation and Green Growth in the Agricultural Sector in Niger 2013-2018”. Some other projects that the World Bank has approved in 2013 include Integrated Ecosystems Management, Niger Community Action Program Phase 3 and Skills Development for Growth Project. The African Development Bank appraised the Water Mobilization Project to Enhance Food in Maradi, Tahoua and Zinder Regions (PMERSA-MTZ) in June 2011. FAO launched a preparatory project on the agricultural and livestock census in 2004 that has led to a larger project, “General Census of Agriculture and Livestock”, funded by the European Union. The German international development agency GIZ has been implementing the LUCOP program on poverty reduction in Niger since 2003. The program comprises several components including the support to local self-government by villages and municipalities; foster the establishment of community infrastructures; and promote the sustainable management of natural resources. The French Cooperation Agency is assisting in rural credit and Tahoua Credit Program, and the World Food Program has been providing assistance through “Food for Training” instrument.

Ministry of Agriculture and Livestock

Niger National Institute of Agricultural Research (INRAN)
The INRAN, located in Niamey, does not provide extension services to the farmers. However, it plays an important role in generating improved varieties and technologies. INRAN has been involved in the Sub-Saharan Africa Challenge Program (SSACP). One of the objectives of SSACP is to implement smallholder farming systems that are in harmony with good natural resource management. The SSACP method is based on the learning-by-doing principle intended to enable farmers to develop their knowledge and experience. In Niger, SSACP’s agricultural R&D activities are being conducted on INRAN’s Kano-Katsina-Maradi Pilot Learning Site.

Abdou Moumouni University of Niamey
The university does not provide agricultural extension services to the farmers, but it prepares future professionals in various agricultural disciplines including extension through its degree programs. The university has a College of Agriculture that comprises Faculty of Agriculture, Centre of Excellence for Regional Agriculture, Department of Animal Production, and a Department of Soil Science.

The private sector has so far played little role in providing extension and advisory services to the farmers. Individual businessmen are interested in just selling farm inputs and equipment. There are a few consulting firms in the water sector while others show some interest in commercialization and agro-processing activities.

There are dozens of NGOs in Niger, and most of them have been involved in emergency type of work. Some of them, however, have hired public extension staff at times to do advisory work.  No NGO is presently engaged in extension and advisory activities in a significant way.  Names of a few NGOs are given below.

There are many farmers-based organizations/associations/cooperatives in Niger, some created and managed by the farmers and some established with the government support. Most of the organizations are weak in structure, management, operations and finance. The self-formed organizations usually lack much needed physical, financial and technically trained human resources while those formed or supported by the government become too dependent on the government. Presently, none of the farmers’ organizations provides extension and advisory services to its member farmers in an organized and sustained manner.

The organizations/associations/cooperatives have been receiving due attention and support from the government or other donor-funded programs and projects. Depending on the objectives of various projects, the capacity of selected farmers’ organizations located in the project area was enhanced through training and physical and financial support. Village cooperatives were actively used by the donors during 1980s for promoting adult literacy and rural development programs. In recent years, the main area of donors’ interest in involving the organizations has been irrigation/water management, but topics like natural resources management, marketing, production diversification, and livestock have also been covered. The following types of farmers’ organizations exist in Niger:

The following list shows an excerpt from the GFRAS Directory of Extension Providers for Niger. Some of these entries may be specially marked for having more detailed information in the database of the Worldwide Extension Study WWES.

For pre-service education in agricultural fields including agricultural extension, the main academic institution in Niger is Abdou Moumouni University, located in the capital city of Niamey. The university offers degree programs in agronomy, animal production, crop production, and soil science. The University previously had three University Institutes of Technology located in Maradi, Tahoua, and Zinder out of which the institute in Tohua offered programs in agro-business (agriculture, husbandry and forestry). As of 2011, the three institutes have been changed into individual universities.

For in-service training, extension staff can make arrangements with the Abdou Moumouni University, or with one of the above mentioned three new universities located in other cities. Training courses in agricultural subject-matter can also be arranged at the Niger National Institute of Agricultural Research, or at the Livestock Multiplication Center. Certain international NGOs like the World Vision, Niger or CARE, Niger can probably assist in arranging in-service training if requested.

An NGO, Telecom Sans Frontieres (TSF), has established a cyber café in Dakoro that caters for government agencies and private sector companies. The NGO plans to train student in the use of computers and the Internet. The government has established an ICT training center in Niamey, and has created a network comprising the press, women parliamentarians, NGOs, youth, and universities to help accelerate the integration of various strata of society with the ICT development. Niger is incorporating ICT in its educational system at all levels. The African Virtual University, a World Bank-sponsored e-learning project, has adopted the Abdou Moumouni University as one of the five francophone universities in its distance learning program.

The above mentioned developments for applying ICT in various sectors of Niger are encouraging. However, there is no indication so far that ICT applications are being considered in support of agricultural extension and advisory services.

Agyeman, O.T. 2007. ICT in Education in Niger. Available at www.infodev.org.

Blum, M.L. and A. Mbaye. 2009. A Participatory Process Approach for Developing a Pluralistic, Demand Led and Market Oriented Advisory System – Case Study of Niger. Paper presented at the XIX European Seminar on Extension Education, “Theory and Practice of Advisory Work in a Time of Turbulences”, held at Assisi, Perugia, Italy; 15-19 September 2009.

Painter, T.M. 1980. Adult Literacy and Cooperative Training Programs in the Niamey Department Development Project (Niger Republic): Evaluation of Phase I; Activities and Recommendations for Phase II. Contract No. AID/afr-C-1686 Project No. 625-0929 for Planning Management and Research.

Souley, H.  1990. The Impact of a Project Focusing on Soil and Water Conservation: A Case Study of the Integrated Rural Development Project of Keita, Republic of Niger. Unpublished Thesis for Master’s Degree. United Kingdom: Agricultural Extension and Rural Development Department, University of Reading.