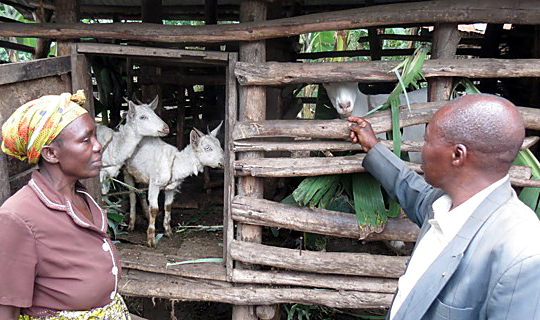 Many see rural advisory services (RAS), also called ‘extension’, as indispensable in efforts to improve agricultural production in smallholder farms in developing countries. However, development specialists have lamented that, bogged by infrastructural and logistical challenges, traditional RAS, such as the old ‘training and visit’ systems, have mostly failed to reach rural smallholder farmers. (1,2)
(1) Gautam, M. and Anderson, J.R. 1999. Reconsidering the evidence on returns to T&V extension in Kenya. Washington, DC: World Bank.

Higher agent–farmer ratios are critical, especially given the renewed global focus on sustainable, climate smart agriculture. Effective RAS could enhance the resilience of smallholder farmers, who are most vulnerable to production shocks resulting from socioeconomic, climate, and environmental catastrophes. (3)

New RAS approaches that complement traditional systems are thus being explored and pilot-tested in many countries. One of these, the community knowledge workers (CKW) approach, which started as part of the Grameen Foundation’s economic development outreach to rural communities in the developing world, has been tried in Uganda and elsewhere. It entails fielding CKWs who reside and work in clientele communities to expand the reach of extension workers. For example, under the Uganda traditional RAS system through the Ministry of Agriculture, Animal Industry and Fisheries (MAAIF) extension agents serve between 3,000–9,000 households across 15–40 villages within a 50–300 km radius. On the other hand, a CKW serves 500–900 households across 4–6 villages within a radius of 5–10 km. (4)

(4)  Grameen Foundation. 2013. A digital revolution in agricultural extension – the CKW initiative.
Because the CKWs are community members themselves, they can help in providing feedback on community perspectives to decision-makers.

The CKW system, a type of farmer-to-farmer extension, involves local networks of farmer-to-farmer peers serving as information intermediaries. They use smartphones and other information and communication technologies (ICTs) to reach fellow farmers with agricultural (livestock management, agronomic practices for crops), weather (seasonal and daily forecasts), and market price information. Their smartphone connects to a remote server called Salesforce, which provides access to real time agriculture, market price, and weather information.

As community members, CKWs incur little transaction cost in delivering RAS within their communities. They are relatively efficient in reaching farmers in remote areas because of their familiarity with their zones of influence. They provide advisory services to individual farmers as well as farmers’ groups, thereby expanding the scope of knowledge sharing considerably.

The CKW approach puts in motion the ‘last mile’ principle, which takes RAS to farmers and households that are difficult to reach. CKWs bridge the usual RAS delivery gap because they are integral members of the communities they serve. Scholars have bemoaned that traditional systems often prioritise and thus benefit mainly farmers with larger farm sizes. This may be because many smallholder farmers usually have holdings scattered across difficult terrains, which traditional agents find difficult to visit.

CKWs operate in different parts of the world, including sub-Saharan Africa (Ghana, Kenya, and Uganda), Latin America (Colombia and Guatemala), Asia (China, India, and Indonesia), the Middle East, and Northern Africa. Although they are called different names in different countries (e.g. they are known as líderes productores or production leaders in Colombia), (5)

Grameen Foundation. 2013. A digital revolution in agricultural extension – the CKW initiative.
the core principle of reaching the last mile remains the same.

CKWs work in partnership with other organisations, known as service partners. Operational arrangements with these service partners vary depending on the setting. For instance, in Guatemala, an organisation called Crecer coordinates CKWs, who then train farmers’ groups on how to meet value chain requirements. In Kenya, where CKWs are called Village Knowledge Workers, they work in partnership with Farm Concern International, a market development and smallholder commercialisation organisation. Among other services, these village knowledge workers help farmers store their crops and provide them with access to market price information and to financial institutions that offer advanced payments for their harvests.

The CKW approach, which has been replicated in other countries, started in Uganda where CKWs worked with different service partners, including the East Africa Dairy Development (EADD) project, MTN-Group, National Agricultural Research Organisation (NARO), Uganda Department of Meteorology (UDoM), and Makerere University. In this set-up, the NARO and Makerere University serve as major providers of crop and livestock information, while UDoM provides seasonal weather information.

(6) Campenhout, B.V. 2013. Is there an app for that? The impact of community knowledge workers in Uganda. International Food Policy Research Institute, Discussion Paper No. 1316. Washington, DC: IFPRI.
CKW Pulse is used to communicate directly with support specialists at the CKW headquarters, to access monthly targets, and monitor individual progress. Data collection or surveys are done using TaroWorks.

TaroWorks and the CKW Search app both function online and offline. Thus, in remote locations without cellphone coverage, CKWs can perform searches or track farmers’ activities offline. Information generated offline is cached and later transmitted to Salesforce when the CKW comes within cellphone coverage.

CKWs are complemented by government field extension officers at the district level and call centres at the headquarters. Farmers can request additional information from call centres by speaking directly to experts. Thus, the CKW approach supports two-way information flows between farmers and experts. This feedback loop helps determine the types of information to be included or updated in the apps.

CKWs are usually paid per month based on monthly performance targets, which vary. For example, in Uganda, each CKW is expected to conduct 48 or more searches, register 15 or more new farmers into the service, and conduct 8 or more surveys. Those who meet monthly targets receive about UGX60,000 (Ugandan Shillings), which is equivalent to approximately US$24 per month.

CKWs need little technical capacity apart from basic English (the apps and their content are in the English language) and proficiency in the use of mobile phones.  The functions include managing daily data transmission to Salesforce and handling the power toolkit devices that go with the smartphone.

A CKW operation involves costs for launching and maintaining the cloud-based server to support field operations, data management, and performance monitoring. Costs vary greatly depending on context and activity, ranging from thousands to millions of US dollars. For example, the Uganda operation initially cost around US$4.7 million, which was supported by a grant from the Bill & Melinda Gates Foundation in 2009. (7)

Target groups: CKWs serve smallholder farmers in rural areas where poor road networks and limited infrastructure often prevent traditional RAS agents from visiting. While conventional RAS often ignore clients with scattered farm holdings, CKWs are able to reach even remote areas. In Uganda, CKWs receive bicycles, smartphones, and solar power equipment on loan, which they pay for over time. They usually get around by walking or cycling along narrow paths to and from farmers’ fields. Thus, CKWs are likely to create greater impact among smallholders, including pastoralist farmers.

Ecological and institutional setting: CKWs can work in all agricultural ecologies. However, they are most useful in serving farmers in remote terrains that traditional extension workers find difficult to reach.

Governance arrangements are context-specific. For example, in Uganda, the sponsoring agency and the community that selects CKWs jointly decide on how the system is administered and managed. In Ghana, where CKWs perform a different type of service (healthcare), they are linked with the government health services. In Latin America, the Middle East, and Asia, CKWs work with private entities for RAS and financial service delivery.

In general, community participation in worker selection makes CKWs accountable to their communities. For instance, in Uganda, CKWs are required to allocate a minimum of 10–15 hours per week for RAS activities. Sponsoring agencies and operational partners provide incentives by ensuring that CKWs perform valid searches for farmers and upload queries to Salesforce.

CKW roll out to new communities is usually sandwiched by Progress out of Poverty Index (PPI) surveys, which help identify the most economically vulnerable communities for engagement. After roll out, PPI helps track CKW impact based on key indicators such as nutritional status of households.

Maintaining feedback loops between community members and CKWs helps to guide implementation and to identify necessary areas of adjustment. The Uganda CKW programme underwent such an adjustment when it was restructured in 2014 (from about 1,100 agents working in 35 districts to only 300 agents covering 3 districts) to enhance efficiency. To compensate for the workforce reduction, each CKW now trains 50 lead farmers who in turn are asked to serve 10 other farmers in the community. The new programme is called CKW 3.0, indicating its emphasis on three value chains (coffee, maize, and banana) across 3 districts.

CKWs have made significant impacts wherever they are found. For example, Uganda reported that CKWs had improved RAS outreach to 289,000 farmers across 22,000 villages in over 35 districts (about 40% of the country) by 2014. In Colombia, CKWs have organised some 563,000 rural coffee farmers into effective coffee producing value chains. The Indonesian CKW programme, Ruma, reportedly reach over a million clients. (8)

(8) Grameen Foundation. 2014. Annual report, 2013–2014: Breaking the cycle.
Although an earlier analysis (9)
(9) Grameen Foundation. 2013. A digital revolution in agricultural extension – the CKW initiative.
of CKW impact in Uganda found no significant effect on the productivity of maize, it showed evidence that CKWs positively influenced farmers’ decisions to cultivate more profitable crops.

This paper was produced by the University of Illinois, with financial support from GIZ (Gesellschaft für Internationale Zusammenarbeit), and PIM (the CGIAR Research Programme on Policies, Institutions, and Markets).