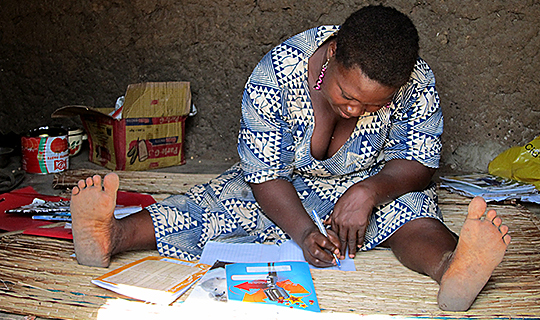 MAFF is an advisory approach based on learning and decision-making processes. MAFF principles are derived from the management sciences. The main objective is to strengthen farmers’ capacities to manage all the resources of their farms (land, labour, inputs, money, crops, and livestock) and other activities (off-farm and non-farm).

Participatory methods are used to enable participants to conduct self-analysis of their practices concerning various farm dimensions (production, processing, marketing, etc.) by considering the different phases of the management cycle (analysis, planning, monitoring, adjustment, and evaluation) and their economic and social environment. MAFF is based on the use of decision-support tools that enable farmers to analyse their technical and economic results; in most cases based on record keeping.

As a result, producers gain a new understanding of their farming systems. They become able to autonomously improve their lives, through the development of new projects or improvement of their agricultural, managerial, or social practices. Based on these principles, MAFF can be adapted to various agro-ecological, institutional, and organisational settings. MAFF is complementary to other advisory approaches (specialised advice or advice supporting collective actions).

To implement MAFF, tools and methods have to be designed according to the local context, governance mechanisms, and financial and human resources available: thus, there is not one standard model. Two different examples are presented in Boxes 1 and 2.

Benin started implementing MAFF in 1995 through pilot projects. Now it is integrated into the national agricultural advisory policy.

MAFF is implemented through the following phases, facilitated by advisors:

Collective activities and exchanges are encouraged: group meetings to discuss results, field visits, trials in farmers’ plots. The tools used to support farmers have gone through several adaptations and are contextualised in each region. A key improvement in recent years has been the design of management tools for illiterate farmers.

The MAFF service is provided by a dozen NGOs, farmers’ organisations, and by the Ministry of Agriculture, which has recruited more than 250 advisors. One advisor works with 7 to 9 groups, each group gathering 10 to 30 farmers. A farmer-facilitator is trained in each group to undertake some of the advisory tasks. Almost 20 000 farmers are now taking part in MAFF activities in Bénin.

Gret (a French NGO) has been implementing MAFF in Myanmar since 2011. Due to the lack of farmers’ organisations in Myanmar, Gret is implementing the MAFF approach with its own staff in collaboration with a local NGO. MAFF (called Malasaka in Myanmar language) is now delivered in three regions of the country, with tools inspired by West African experiences but adapted to the national and local contexts. MAFF is developed in a participatory way, involving farmers in the design of the tools and the provision of services. The main challenge has been to train advisors who could understand and implement the principles and tools of MAFF. The approach started through individual advice. The process is gradually strengthening closer interactions between advisors and farmers and a greater diversity of advisory tools are being designed. In 2014, besides offering individual advice, a collective touch was introduced through group meetings and the promotion of MAFF farmer-facilitators. MAFF in Myanmar is now directly reaching 580 families in more than 111 villages and 74 MAFF farmer-facilitators are operating.

The quality of the advice provided depends mainly on the advisor’s skills. Advisors should have mastery over the content (production techniques, farm management), the modalities of delivering advice (participatory methods, learning processes, facilitation of links with other service providers), and the ability to build personal relationships (listening, empathising, and approachability). Specific training is also needed for farmer-facilitators depending on the tasks they perform.

Due to financial constraints and time limitations, advisors are often trained within the framework of projects. To support more sustainable training mechanisms, MAFF actors need to participate in broader initiatives to train advisors – or, more broadly, rural development agents – within the framework of public and private organisations at the national level (e.g. University of Parakou in Benin). In addition special efforts should be made to train all the actors involved in the organisation of MAFF, including office managers of advisory services, who implement and monitor the activities, and elected farmers who guide, assess MAFF, and carry out lobbying activities. Support and training mechanisms are gradually being established to build the capacity of advisory service providers able to implement MAFF but work is still needed to institutionalise this support within sustainable national institutions.

Advisory services have significant costs: costs for advisors and MAFF managers (salaries and operating costs); and costs for training and the various back-stopping activities. Total advisory costs are US$20–80/year/farmer for most MAFF programmes in Africa, depending on the number of farmers per advisor. Where MAFF combines management advice for groups of non-literates and literates or those that rely heavily on farmer-facilitators, the cost is much lower (between US$2 and US$20/year/farmer).

MAFF still relies heavily on international aid for funding when implemented by NGOs and producer organisations. It remains a challenge to get direct contributions from farmers because many of them are not able, or willing, to pay for training. Asking for contributions from producer organisations is more realistic when the latter undertake commercial activities (marketing of agricultural products or sale of inputs to members). But these contributions by producers and producer organisations currently cover only a small part of the cost of advisory services and this situation is likely to continue for the foreseeable future. Currently, the most promising possibilities for funding appear to be: (i) contributions from downstream actors from well-structured value chains (direct contribution or levies at the marketing stage); and (ii) the establishment of national or regional development funds aimed at supporting rural development, including advisory activities.

The strengths of MAFF are:

The weaknesses of MAFF are:

Although MAFF is better suited for contexts where farmers are already active in markets and benefitting from various economic opportunities, it can be adapted to a large  range of farmers. For example, in Myanmar, fisherfolk and livestock breeders are joining MAFF, along with rice producers and subsistence farmers.

MAFF farmers have some specific personal characteristics. First, those who join MAFF do it on a volunteer basis  (incentives are inefficient), reflecting their desire to change and to improve their farming and management practices. Second, MAFF is mostly based on record- keeping – even if there are interesting experiences with illiterate farmers – so participants are generally literate or involved in functional literacy programmes. MAFF tends to more easily reach proactive and literate farmers, as they are the ones who will more easily adopt a management mind-set and use record-keeping tools. When introducing MAFF in a new area, service providers may rely on these categories of farmers for quick adoption. Then they can adapt the approach to reach other categories (e.g. non-literate or less innovative farmers) with the use of specific management tools and facilitation methods. However, in some cases, service providers started with illiterate farmers.

Many actors are involved in providing MAFF: donors, government agencies (either implementing and/or coordinating advisory services), projects implementing or supporting service providers, NGOs, producer organisations, etc. As a result there are numerous governance mechanisms in order to fund, monitor, and assess the service provision. To a large extent,      such governance mechanisms depend on the nature of the main organisation providing advice, the history of the advisory service, and the funding arrangements.

Various mechanisms are used for coordination between the various actors (contracts, steering committees) and usually one actor plays the role of broker to facilitate the interactions.

Finally MAFF is generally linked to other advisory services such as specialised advice and it is therefore part of the wider advisory system where coordination is needed but often is still lacking.

In different countries where MAFF evaluations have been undertaken, farmers attributed several kinds of changes to MAFF that can be summarised under three categories:

Conclusion: a gradual scaling up and scaling out

MAFF has been adopted by many actors and adapted to diverse contexts. However, there is a need to scale up and out the approach. Regarding scaling out, options include mobilising producer organisations and farmer-facilitators or improving coordination at regional level among advisory services providers in order to promote synergies.

Regarding scaling up, prospects include designing a mix of solutions to fund MAFF in the longer term and implementing suitable training mechanisms for advisory actors. However, public policies must better define the strategy regarding advisory services and the place of MAFF within the advisory system. Solutions need to be developed in conjunction with all stakeholders involved in MAFF: NGOs, producers, producer organisations, and local and national government).

Faure, G., Toillier, A., Legile, A., Moumouni, I., Pelon, V., Gouton, P. and Gansonré, M. 2013. How to improve the sustainability of approaches for management advicefor family farms in Africa? Toward a research and development agenda. Extension System, 29(2): 29–50.

This paper was produced by CIRAD and Gret, with financial support from GIZ (Gesellschaft für Internationale Zusammenarbeit), and PIM (the CGIAR Research Programme on Policies, Institutions, and Markets).