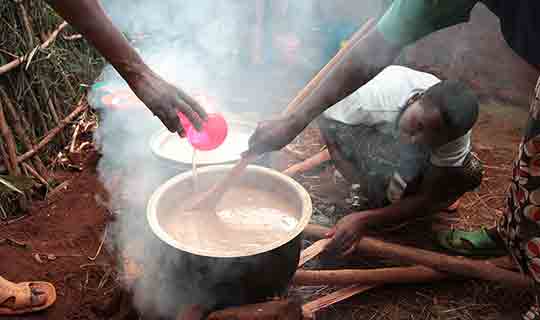 There is a heightened awareness globally and within development institutions and governments of the need to better understand the links between agriculture and nutrition, and to decipher the ways in which the agriculture sector can contribute to improved nutrition. The ‘what’ and the ‘how’ of effectively delivering ‘nutritionsensitive agriculture’ (1)
(1) Nutrition-specific interventions address the immediate causes of undernutrition, like inadequate dietary intake and some of the underlying causes like feeding practices and access to food. Nutrition-sensitive interventions can address some of the underlying and basic causes of malnutrition by incorporating nutrition goals and actions from a wide range of sectors. They can also serve as delivery platforms for nutrition-specific interventions.
services to rural households remain even less understood.

Extension workers (through public, private, and nongovernment organisation (NGO) channels) are often thought of as a promising platform or vehicle for the delivery of nutrition knowledge and practices to improve the nutritional health of rural communities because they reach and interact closely with farmers in different settings. They act as significant service providers of crop, livestock, and forestry aspects of food security, consumption, and production.

Nutrition concepts were first introduced into the training of extension personnel for rural development projects in the 1960s. During those early stages, the general consensus was that to have an impact on nutrition, the agriculture sector would need to expand beyond its sole focus on food production, and incorporate food consumption as well. For this to succeed, a key step was to improve extension agents’ understanding of nutrition-related concepts, as the prevailing low levels of training did not equip them with the tools necessary to recognise the causes and consequences of malnutrition.

This new approach served as a global resource and was later adapted to the national contexts of numerous countries throughout Latin America and Africa. After the 1980s, globalisation altered agricultural policies significantly and resulted in market-oriented agricultural sectors that preferred food producers selling their output in the marketplace, thereby placing less emphasis on improving home consumption. Additionally, by the late 1990s, extension advisory services (EAS) across the developing world were deprived of funding as a result of changes in donor and lending policies, as well as due to the costs of the model. Both of these factors may have influenced the limited success of these early efforts to integrate nutrition and EAS.