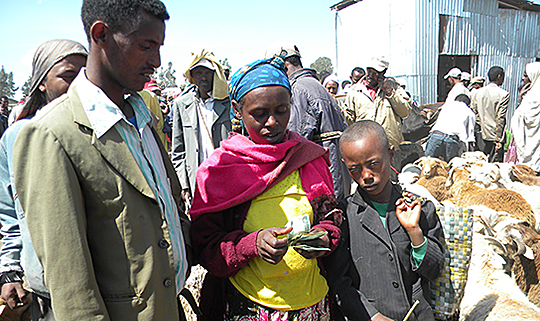 Rural women’s roles and contributions to agriculture remain undervalued and neglected by the sector’s policy- making and implementation processes. Women typically are involved in many aspects of the agricultural value chain, often contributing anywhere from 25 to 75% of the productive labour. However, they generally have less access to rural advisory services (RAS) than men. They also have less access to agricultural inputs, such as fertilisers, technologies, and veterinary services, which reduces their overall productivity. This is particularly a problem in countries in Africa, where women’s agricultural involvement varies from about 30% in the Gambia to 60–80% in Cameroon. (1)
(1) Anriquez, G., Croppenstedt, A., Doss, C., Gerosa, S., Lowder, S., Matuschke, I., Raney, R. and Skoet, J., 2010. The role of women in agriculture. ESA working paper No 10-03. Rome: Food and Agriculture Organization of the United Nations (FAO).
Despite the evidence accumulated over several decades on women’s multi-faceted roles in farm-based livelihoods, and the need to support them, men are frequently still considered as the ‘lead’ farmer in a household, and RAS focus on their market-oriented interests. Women are often still seen as farmers who are primarily interested in feeding their household, rather than as active participants in the commercial value chain. Women play a crucial role in the distribution of both food and non-food household resources that determine the food security of the household. In a variety of contexts around the world, increasing the resources that women control has been shown to improve the nutritional, health, and educational outcomes of their children. (2)
(2) Quisumbing, A. 2009. Do men and women accumulate assets in different ways? Evidence from rural Bangladesh. Background paper prepared for the FAO State of Food and Agriculture 2010. Rome: FAO.
Nonetheless, in many communities, women continue to face gender-based constraints that limit their ability to access agricultural information and opportunities, thereby limiting the family’s potential to be food secure. Increasing women’s access to extension services and agricultural inputs is critical to ensuring family and community food security.

Author information:
Kathleen Earl Colverson is the Associate Director for International Agricultural Programs at the University of Florida. She was formerly Senior Gender Scientist at the International Livestock Research Institute in Nairobi, Kenya. Her research interests include integrating gender into agricultural value chains and participatory training approaches. She can be reached at This email address is being protected from spambots. You need JavaScript enabled to view it..