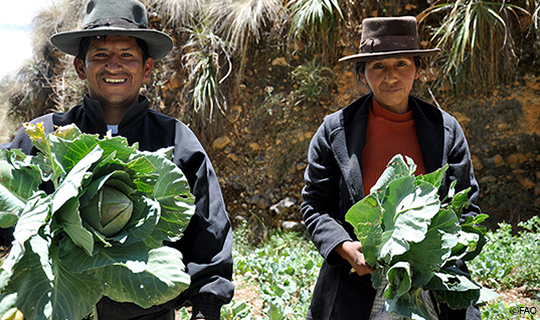 Following the decline of investments in government extension services in the 1980s and 1990s, community- based extension approaches have become increasingly important. One such approach is farmer-to-farmer extension (F2FE), which is defined here as the provision of training by farmers to farmers, often through the creation of a structure of farmer-trainers. We use ‘farmer-trainer’ as a generic term, even though we recognise that different names (e.g. lead farmer, farmer-promoter, community knowledge worker) may imply different roles.

F2FE programmes date back considerably and have been used in the Philippines since the 1950s and in Central America since the 1970s. (1)
(1) Selener, D., Chenier, J. and Zelaya, R. 1997. Farmer to farmer extension: lessons from the field. New York: International Institute for Rural Reconstruction.
F2FE programmes have grown tremendously in Africa in recent years (2)
(2) Simpson, B., Franzel, S., Degrande, A., Kundhlande, G. and Tsafack, S. 2015. Farmer to farmer extension: issues in planning and implementation. MEAS Technical Note. Urbana, IL: Modernizing Extension and Advisory Services, USAID.
and are now quite common, with 78% of development organisations using the approach in Malawi (3)
(3) Masangano, C. and Mthinda, C. 2012. Pluralistic extension system in Malawi. IFPRI Discussion Paper 01171. Washington, D.C.: International Food Policy Research Institute (IFPRI). Available at:
and one-third using it across seven regions of Cameroon. (4)
(4) Tsafack, S., Degrande, A., Franzel, S. and Simpson, B. 2014. Farmer-to-farmer extension in Cameroon: a survey of extension organisations. ICRAF Working Paper No. 182. Nairobi: World Agroforestry Centre.
As common as these programmes are, training materials on the use of the approach and analyses, and comparisons of F2FE programmes are scarce.

F2FE can help in building effective, farmer-centred extension systems and empowering farmers as change agents for improving livelihoods in their communities. Key principles include:

In some cases, F2FE is simply an arm of a top-down technology transfer model, in which communication is one-way, from extension staff to farmer-trainers to farmers. Reorienting such programmes to use a more demand-driven, participatory model is something that must be done by programme designers and managers.

The first step in implementation is to assess whether the F2FE approach is appropriate for the farmers and region in question. A good starting point is to discuss with local authorities and farmers to find out about their interest in testing the approach.

The next step is to select farmer-trainers. Frequently, extension services and communities (i.e. producer organisations or local authorities) select farmer-trainers together. In other cases, only the extension service or the community selects them. A common procedure is for extension services to agree on criteria with community representatives and then the representatives use the criteria to select the farmer-trainers. Criteria vary but often include being able to read and write in a language commonly used by the farmers, having a good reputation, interest and skill in sharing information, farming skills, and being a full-time resident in the community.

Farmer-trainers train farmers on a wide range of practices covering livestock, crops, agroforestry, and fisheries. Roles and responsibilities of farmer-trainers vary but the most frequently mentioned ones include training, monitoring/ following up, advising, conducting demonstrations, organising meetings, and acting as liaison between farmers and development agents. Farmer-trainers often serve the farmer group to which they belong and train others outside the group as well. In Malawi, extension workers typically supervise about 15 farmer-trainers each, who each train about 60 farmers.

(5) Simpson et al. 2015. Op.cit.
But in Indonesia and Peru (Box 1), governments pay farmer- trainers salaries, albeit at lower levels than extension staff. There is controversy in many places over whether to pay farmer-trainers or not. Some argue that they work well without payments and that such payments are not sustainable. Others say that they should be compensated for their efforts and that such compensation motivates them to perform better. It isn’t possible to give overall guidance on payments as whether to pay or not depends on the circumstances.

In parts of Peru, F2FE has become the main delivery vehicle for extension. Peru’s Yachachi (from quechau for ‘one who teaches’) programme reaches 90,000 of the country’s poorest Andean farmers. In addition to being locally recruited and selected, these F2FE trainers are paid by the government via community-awarded innovation funds (no external funding is involved). They receive the equivalent of US$340 per month for four days a week, which is 67% of an extension technician’s salary). Women make up 25% of the 2,500 Yachichis. Training activities focus on a wide range of crop, livestock, and agroforestry practices. Importantly, the national agricultural research and innovation institute (INIA) and SENASA, the national phyto-sanitary service, provide ongoing training and support to Yachachis.

Farmer-trainers need training in both technical aspects (e.g. production practices and marketing) and communication. Most organisations start with several days of residential training, involving presentations, field activities (e.g. establishing demonstrations), and field tours. Unfortunately, some organisations only provide training at the beginning of a farmer-trainer’s tenure.

Periodic training, field backstopping, and on-the-job training, when extension staff meet farmer-trainers, are also important for maintaining farmer-trainers’ motivation and ensuring they have something of value to offer others. Farmer-trainers also need to be taught how to access information themselves. The rapid spread of mobile phones and, in particular, smart phones may help facilitate farmer-trainers’ access to information.

The main costs of an F2FE programme are training (2–3 days of residential training at induction including classroom and field activities and field visits), follow- up training (about 2 days per year), and incentives to motivate farmer-trainers, such as contests, T-shirts, and bags. In Kenya, these costs amount to about US$160 per farmer-trainer per year. (6)
(6) Kiptot, E., Franzel, S. and Kirui J. 2012. Volunteer farmer-trainers: improving smallholder farmers’ access to information for a stronger dairy sector. Policy Brief No. 13. Nairobi: World Agroforestry Centre.
Some other costs, such as for inputs for demonstrations (roughly US$20 per farmer- trainer per year), would occur in a conventional extension programme as well as a F2FE programme so are not included here. Wellard et al.
"}(7) Wellard, K., Rafanomezana, J., MNyirenda, M., Okotel, M. and Subbey, V. 2013. A review of community extension approaches to innovation for improved livelihoods in Ghana, Uganda and Malawi. The Journal of Agricultural Education and Extension, 19 (1): 21–35.
estimated costs of US$400/ farmer-trainer over a 4-year period.

Strengths: A survey of 80 organisations using F2FE in Cameroon, Kenya, and Malawi found that they valued the approach because it was low-cost, helped extension services expand their reach, and improved accountability to the community. Many also reported that farmers’ command of local languages and culture helped promote uptake of new practices. Some reported that F2FE programmes also promote feedback on new practices to research and extension and help strengthen the capacity of communities to access information. As the approach  is low-cost, it is often sustainable, with government extension staff or farmer organisations taking over the backstopping of farmer-trainers after a project ends. F2FE has the potential to improve feedback from farmers to extension staff.

For example, in the East African Dairy Development Programme in Uganda, about one-third of volunteer farmer-trainers were women, while less than 5% of extension staff were women. (8)
(8) Franzel, S., Degrande, A. Kiptot, E. Kundhlande, G. Tsafack, S. and Simpson, B. In press. Does farmer-to-farmer extension increase women’s participation and access to advisory services? Lessons from Kenya, Cameroon and Malawi. Journal of International Agricultural and Extension Education, in press.

For which innovations? F2FE is appropriate for a wide range of innovations but may not be appropriate for high-risk and very technical enterprises and practices (e.g. certain crop spraying practices), innovations where cost of an error may be very high (e.g. treatment of livestock diseases), or for what are essentially permanent decisions (e.g. siting of water control structures).

In which ecological and institutional settings? F2FE has been reported not to work well in areas of low population density where transportation is a constraint. It appears to work best where farmers are organised, that is, farmer- trainers are serving members of a farmer group or a producer organisation, as trainers then have a ready clientele. It may be less suited to high-income, commercial systems, where the opportunity cost of labour is high and social networks may be weak.

The approach fits into a wide range of extension modalities such as private, government, NGO, and farmer organisations providing extension services. Extension services are generally the initiators of F2FE programmes and extension staff often supervise the farmer-trainers. The more that extension services facilitate ownership among local institutions (e.g. producer organisations, local government), the more sustainable the programmes are. They can do this through ensuring that local institutions participate, and even lead, in selecting farmer-trainers and monitoring and evaluating them.

The F2FE approach is widely adapted and used in combination with many other extension approaches. For example, contact farmers in the ‘training and visit’ approach and field-school leaders in the ‘farmer field school’ approach fall into the category of F2FE.


Evidence of impact and potential scalability

Only one study was found documenting the costs and returns of a farmer-trainer programme. Welllard et al. (9)
(9) Wellard et al. 2013. Op. cit.
reported benefit–cost ratios ranging from 7-to-1 to 14-to-1 across four sites where Self Help Africa, an NGO, and local partners supported farmer-trainers in Ghana, Malawi, and Uganda. Several other studies show evidence of uptake of new practices promoted by farmer-trainers and evidence of community members’ and development organisations’ satisfaction with, and appreciation for, farmer-trainers. The rapid spread of the F2FE approach – most organisations using it in Cameroon, Kenya, and Malawi had adopted it only during the past decade – without backing of donors or international organisations is evidence of its demonstrated effectiveness in use.

There are many cases of the approach being scaled up successfully, e.g. the Malawi Ministry of Agriculture works with more than 12,000 lead farmers and the Peruvian Government, with 2,500 farmer-trainers (see Box 1).

Issues of sustainability of the approach

Several factors appear to be associated with sustainability of F2FE programmes:

This paper was produced by the World Agroforestry Centre (ICRAF), with financial support from GIZ (Gesellschaft für Internationale Zusammenarbeit), and PIM (the CGIAR Research Programme on Policies, Institutions, and Markets).

Author information:
Steven Franzel is an agricultural economist, Evelyne Kiptot and Ann Degrande are social scientists, and Josephine Kirui and Jane Kugonza are extension advisors with the World Agroforestry Centre, Nairobi.
John Preissing is an extension specialist and FAO representative, Peru, and Brent Simpson is an Associate Professor at Michigan State University, and Senior Agricultural Officer with the FAO.