The rapid spread of television (TV) channels offers a unique opportunity to disseminate knowledge via private and public information systems to millions of farmers within a short period of time. When agricultural themes and messages are woven into entertaining shows that use popular actors, comedians, and cartoon characters, information reaches out to a much wider audience who might not necessarily be interested in agriculture. Youths are becoming more interested in agriculture through watching reality TV shows that follow the lives of young food producers and stories of farmer ‘superheroes’, making these topics entertaining and at the same time educational, hence the term ‘edutainment’. Edutainment via TV is reaching a widespread audience in the comfort of their homes, creating a passion for farming, and delivering information on vital new technologies to farmers. Edutainment TV shows are aired in several countries (Table 1). All these examples except Farmers Love Safety are produced by private sector players.

Key principles of successful edutainment TV are as follows.

In Kenya, the Shamba Shape Up reality TV show airs every weekend on a popular local channel. Shamba means ‘farm’ in Swahili, and the show is best thought of as ‘Extreme makeover: farm edition’. The show guides small-scale farmers on how to improve agricultural productivity on their farms. Presented by popular Kenyan actors, it is engaging, entertaining, and yet informative. The Shamba Shape Up team, which visits a different farm in a different area of the country each week, includes the actors, a film crew, and a number of experts from partner organisations who specialise in the topics covered in the episode. The show has become very popular, attracting 11 million viewers around East Africa. During each episode, viewers are given a short code that they can text to the programme makers to ask questions and/or to request a free printed pamphlet on the week’s topics.

The following key steps should be taken into account to ensure the success of an edutainment TV show. During implementation, it is important that the key principles of good edutainment are followed.

5. Broadcasting Promote the show through various means, such as Facebook and TV advertisements

Monitoring is the continuous routine tracking of program activities. Evaluation involves an assessment of the extent to which a program has achieved its intended objectives and how it could be improved. There are four main reasons for undertaking an evaluation.

Creating a successful edutainment TV show requires a dynamic media team that is able to harness the required resources and capacities – directing, researching, production, scriptwriting, and editing. It is important that scriptwriters have an understanding of agriculture and familiarity with the target audience (e.g. smallholder farmers), including their resource constraints and needs. Other capacities required are in campaigning, publicity, fundraising/resource mobilisation, and partnership building. 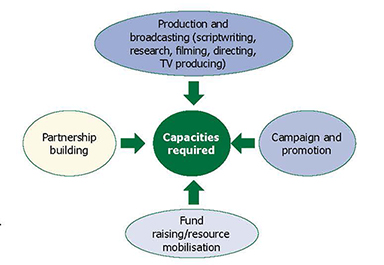 Costs will vary depending on the scale of the project and services provided, but generally include equipment and procurement of licences; staffing; research, development, filming, and broadcasting; promotion; maintenance of equipment; and monitoring and evaluation.

Costs of producing a show are relatively high in terms of absolute cost, but low in terms of cost per household reached. For example, engaging Shamba Shape Up to film five six-minute segments costs US$50,000, with an audience of 3.5 million households – only US$0.014 per household.

The major strengths and weaknesses of edutainment TV programmes for agricultural information are shown in Table 2.

The approach is appropriate for a wide range of people, including women and youth, and people in urban areas who are rarely in contact with extension services. For example, Shamba Shape Up reaches more women than men (66% female to 34% male). This is important as women are generally excluded from traditional training and workshops. Women are able to view the TV shows directly, which reduces problems associated with inaccurate transfer of knowledge. It allows them to make informed decisions to adopt practices based on the information they receive from the show. It is also particularly useful for attracting the youth to view agriculture as an enterprise worth venturing into.

It is not, however, appropriate for poor farmers who lack access to TV, or for those who may not understand the language in which the shows are broadcast. One solution is to record shows on DVD or flash drive and show them on projectors in rural areas, to reach viewers with no access to TV. They can also be translated into local languages if funding is available.

Edutainment TV is appropriate for a wide range of agricultural innovations. For example, Shamba Shape Up series 5 (1)
Mediae. 2015. SSU_Series_5_KAP_Report_2015.pdf. Kenya knowledge, attitude and practices survey report. Nairobi: Mediae Company.
focused on innovations related to dairy practices, soil conservation, poultry, nutrition, financial literacy, planting and husbandry of sweet potatoes, tomatoes, sunflower, maize, rice, and other crops and enterprises. In one of the Hridoye Mati O Manush series, farmers in Bangladesh were introduced to new methods of crop diversification, composite farming, simpler ways of production, transportation, and marketing, in addition to avoiding having to deal with intermediaries.

Edutainment TV shows can also be integrated with mobile phones and call centres to make them more interactive. Introducing competitions within a show can make it more attractive. A good example is Farmers Love Safety in Thailand, which features two opposing teams of farmers who compete over which group can produce the highest yields and the best quality harvest. Shows can also be uploaded on YouTube and packaged as DVDs for later use.

Edutainment TV shows are not available in many countries. Where they are available, people need to have access to TV services or the internet (assuming that shows are also available online). Research has shown that people in rural settings who do not own a TV often watch in community halls, bars, and other social places, or in friends’ and relatives’ houses. A 2010 study in Tanzania found that 41% of the population watches TV weekly. (8)
Murthey, G. 2011. Tanzanian media environment: current access, potential for growth and strategies for information dissemination. Washington, DC and Nairobi: Intermedia, The AudienceScapes Project.
A high proportion of viewers are people from urban areas; however, about 38% of the urban population own farms in rural areas and/or may advise and provide inputs to rural relatives who farm.

Edutainment TV showing agricultural innovations can be implemented by a wide range of actors including the private sector, government, NGOs, and other development practitioners with an interest in educating viewers about improved farming techniques. In edutainment TV, the company or organisation producing the show has overall ownership rights to the show. But to safeguard the show’s credibility, it is important to involve relevant experts to ensure high-quality content. Thus strong and diversified partnerships are essential with research organisations, government departments, universities, and NGOs for capacity building and technical guidance, and with institutions that can offer financial support. The entity managing the show has to ensure all partners’ needs are met and everyone has an equal amount to gain from the partnership.

Edutainment TV shows have been demonstrated to have a positive impact in Kenya. An impact assessment by the University of Reading (9)
University of Reading. 2014. Assessing the impacts of Shamba Shape Up. Africa Enterprise Challenge Fund, Mediae Ltd and University of Reading.
found significant uptake of practices featured on Shamba Shape Up (Box 1), and increased incomes for farmers who watched the show. In 2014 it was estimated that the impact of Shamba Shape Up on the dairy sector in East Africa could be valued at US$24 million through increased milk production. The show has also helped to reduce postharvest losses and increase financial literacy. The impact assessment noted that for a new agricultural practice to be adopted, it needs to be viewed on TV between five and eight times.

Financial sustainability is a major issue in edutainment. Initial establishment costs do need to be externally funded, but at later stages a profit-oriented business model may be developed by having agencies and service providers buy airtime and advertise their products. Farmed and Dangerous earns revenue from advertisements during the show. An effective business model will be scalable, sustainable, and based on clients’ needs – not necessarily true of services offered by donors free of cost. Shamba Shape Up currently earns about half its revenue from organisations funded by donor agencies promoting agricultural practices, and half from commercial companies that gain exposure by demonstrating their products and practices.

Chachhar, A.R., Hassan, S.H.J., Omar, S.Z. and Soomro, B. 2012. The role of television in dissemination of agriculture information among farmers. Journal of Applied Environmental and Biological Sciences 2 (11): 586–591.

This paper was produced by the World Agroforestry Centre and Shamba Shape Up with financial support provided by the agencies with the logos below.

This work was undertaken as part of the CGIAR Research Program on Policies, Institutions, and Markets (PIM) led by the International Food Policy Research Institute (IFPRI). This publication has not gone through IFPRI’s standard peer-review procedure. The opinions expressed here belong to the authors, and do not necessarily reflect those of IFPRI.